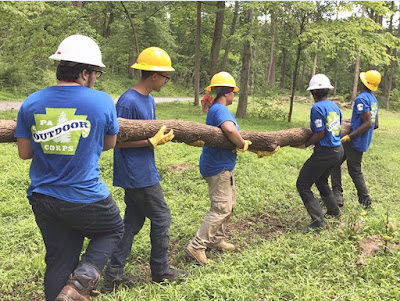 The December 3 PA Environment Digest is now available.  Click Here to read this week's issue.
at 9:30 PM No comments:

On November 29, Gov. Tom Wolf signed an executive order establishing a bipartisan Pennsylvania Redistricting Reform Commission and appointed David Thornburgh, president and CEO of the nonprofit Committee of Seventy, as chairman.
Capitolwire.com reported Senate Majority Leader Jake Corman (R-Centre) as saying Thursday there was still a window to pass legislation to change the redistricting process in the constitution for the 2022 election.
“This commission will bring together diverse experts and citizens to explore ways that Pennsylvania could use policies, technology and data to curb gerrymandering and ensure fair maps,” Gov. Wolf said. “There has been significant bipartisan support for bringing more fairness to this process. The goal of this commission is to hear from experts and citizens about what can be done to make this process more fair. The redistricting process should ensure every citizen’s voice is heard in our democratic process.”
Executive Order 2018-07 creates the commission that will review non-partisan redistricting processes in other states that reduce gerrymandering, provide opportunities for public comment at community meetings and online, and make recommendations to the governor and legislature for a non-partisan redistricting process in Pennsylvania.
“The creation of this commission is an important next step in ensuring that all Pennsylvanians have a chance to be heard on this important and fundamental question of our representative democracy,” said David Thornburgh. “I’m honored to be asked to serve and will do my best to make sure that the commission listens well, encourages a vigorous debate, and comes to conclusions that are thoughtful and fair.”
The commission is comprised of 15 members, including two state senators and two state House members. The 11 members appointed by the governor include:
-- Lee Ann Banaszak, Penn State University
-- Dr. Damary Bonilla-Rodriguez, Governor’s Advisory Commission on Latino Affairs
-- Susan Carty, President, League of Women Voters of Pennsylvania
-- Kathy Dahlkemper, Erie County Executive
-- Charlie Dent, Former Congressman
-- Amanda Holt, Lehigh County Commissioner
-- Rev. Robert Johnson, Tindley Temple United Methodist Church
-- Sharmain Matlock-Turner, President, Urban Affairs Coalition
-- Wes Pegden, Carnegie Mellon University
-- David Thornburgh, President and CEO, Committee of Seventy
-- Secretary of the Commonwealth or designee
The commission will engage the public, redistricting experts and other stakeholders to make holistic recommendations and emphasize the importance of having elections with integrity and fairness.
Earlier this year, Gov. Wolf held a series of listening sessions across Pennsylvania to hear from the public about redistricting and gerrymandering after the Pennsylvania Supreme Court overturned the state’s congressional district map. The state Supreme Court enacted a new congressional map in February.
In March, the governor introduced his 21st century voting reform plan that includes same day and automatic voter registration, modernizing absentee voting, and enacting campaign finance reform to reduce the influence of special interests in Harrisburg.
Gov. Wolf has long advocated for improving and modernizing the election and voting process. Upon coming into office, the governor launched online voter registration. More than one million Pennsylvanians have used the system, which makes it easier to register to vote.
Gov. Wolf’s administration also launched a voter information texting initiative and a program to get high school seniors to register to vote.
Click Here for a copy of the executive order.
NewsClip:
AP: Wolf Establishes Panel To Examine Redistricting Approaches
at 11:44 AM No comments: