PennLive.com What Were The Biggest Stories Of The Decade In PA?
Newsmaker Of The Decade: Survivors Of Catholic Clergy Child Sexual Abuse
Editorial Cartoon: Child Shot In Philadelphia Every 3.7 Days During 2019
Looking Back At The Biggest Pittsburgh Stories Of 2019
Remaking The Erie Region: Progress In 2019
20 Things Turning 20 Years Old In 2020
Schuylkill County Town Made It Thru 2019 Without A Functioning Local Government
Op-Ed: Progress In 2019 Sets Stage For Greater Things In PA In 2020 - Sen. Aument
Editorial: Let’s Hope 2020 Makes Better Year
Editorial: The Rear-View Mirror Of 2019
WITF Smart Talk: Suicide
Tuesday PA Environment & Energy NewsClips 12.31.19 -- Click Here
National/International
61,000 PA Workers Become Eligible For Overtime Jan. 1 Under Federal Law Change [PaCN]
Trump Tariffs Cost Pennsylvanians More Than $700 Million In 2019
Op-Ed: My Goal Is To Keep Working On Kitchen Table Issues - Cong. Wild
Democrat Drops Out Of Race For Cong. Kelly Seat
Editorial: Berks County ICE Facility Is Immoral, Perhaps Illegal
3 Years In, No Sign Of Trump’s Replacement For Obama Health Care
From Environment To Courts, 10 Ways Trump Changed America
Column: Three-Quarters Of People Charged For Making Threats Against Politicians Came From Right
Op-Ed: Why All Eyes Will Be On PA For 2020 Election
Op-Ed: Who Will Win 2020 Presidential Elections?  Don’t Ask
Op-Ed: Some New Year’s Resolutions To Save Our Republic
Op-Ed: Some Resolutions To Break In The New Year
AP: Trump Signs Law To Reduce Robocalls, Though They Won’t End
You’ll Have To Fill Out The 2020 Census Soon, Here’s What It Will Ask
at 5:29 AM No comments:

On December 30, Department of Labor & Industry Secretary Jerry Oleksiak reminded employees and businesses about a new federal law that will make 61,000 workers in Pennsylvania newly eligible for overtime pay of time and a half beginning January 1, 2020.
Oleksiak is also urging Pennsylvania lawmakers to do more for all our hard working men and women, who will continue to earn an embarrassingly low minimum wage of $7.25 in the new year.
“This new federal law means some of our workers can begin earning the overtime pay they deserve, but far too many are struggling to make ends meet because of Pennsylvania’s stagnant minimum wage. It is time for the commonwealth’s lawmakers to recognize the value of our hardworking men and women and increase their wage,” said Oleksiak. “Every one of our neighboring states has invested in their workers by boosting the minimum wage. It is unconscionable that Pennsylvania has not done the same in more than a decade.”
“Senate Bill 79 (Tartaglione-D-Philadelphia) would give nearly 400,000 Pennsylvanians a much needed first step towards a more secure financial future,” added Oleksiak. “The bill had overwhelming bipartisan support in the Senate, and I am disappointed that the House failed to consider this compromise legislation prior to leaving for the holiday break. Pennsylvania’s workers deserve more.”
An increase in the minimum wage will give working Pennsylvania families a better livelihood, save tax dollars by reducing the number of individuals and families receiving public assistance, and strengthen local economies by increasing workers’ paychecks.
The increase in earning thresholds under the new federal overtime regulations is a step in this direction, ensuring that more employees who work overtime are fairly and fully compensated for their labor.
The new federal overtime rules, under the U.S. Department of Labor, go into effect on New Year’s Day, January 1, 2020.
Who is eligible for overtime--
-- With a few exceptions, all hourly employees who work more than 40 hours per week;
-- Most salaried employees who work more than 40 hours per week and earn less than $684 per week/$35,568 per year are eligible for overtime, regardless of their job duties; and
-- Most salaried employees who are not engaged in an executive, administrative, or professional capacity, regardless of how much they are paid.
Who is not eligible for overtime--
-- Salaried employees who are engaged in an executive, administrative, or professional capacity and make more than $35,568 per year; and
-- Other occupations specifically exempted by the minimum wage act.
For more information on the new overtime rule, call 1-800-932-0665 (L&I’s Bureau of Labor Law Compliance), send email to: RA-LI-SLMR-LLC@pa.gov or visit the Department of Labor & Industry’s website.
[Posted: December 30, 2019]
at 7:19 PM No comments: 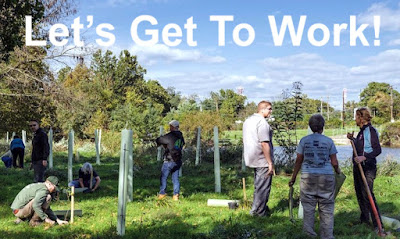 The December 30 PA Environment Digest is now available. Click Here to read this week’s issue.
at 9:33 AM No comments: