The Liquor Control Board Wednesday released its Fiscal Year 2017-18 Annual/Retail Year In Review Report, which, for the first time, incorporates retail sales trends in a single, comprehensive publication detailing agency operations, popular products, and financial results.
The annual report, in its sixth year, details the agency's financials and provides insight into functions including store operations, licensing, marketing and merchandising, supply chain, wholesale operations, information technology, alcohol education, and personnel.
The document is filled with statistics and descriptions intended to shed light on how the agency works and where the money it generates goes.
This year's annual report also includes information previously detailed in a separate publication, the Retail Year in Review. It showcases sales by product category, individual products, counties, e-commerce, stores, and sales periods.
Highlights of the 2017-18 Annual Report include:
-- A one-page summary showing distribution of PLCB funds to various recipients. For example, more than $749.6 million was returned to the Pennsylvania General Fund and state and local government beneficiaries in fiscal year 2017-18.
-- A summary of store operations, including store branding efforts and celebrity events.
-- A breakdown of the 76,000 license and permit applications processed and more than 8,200 investigations completed, as well as a breakout of licenses by county.
-- A summary of Bureau of Alcohol Education efforts to reduce and prevent dangerous and underage drinking.
-- Sales information and trends by product and category, including top-selling spirits and wines by county.
-- Store-by-store sales and an expanded section on sales of Pennsylvania-made wines and spirits.
Allegheny, Philadelphia, and Montgomery counties accounted for more than a third of the state's total wine and spirits sales.
Click Here for a copy of the report.
at 9:11 PM No comments:

AG Shapiro Asks U.S. Dept. Of Education To Grant Student Loan Relief For Borrowers Who Attended Schools That Shut Down

Attorney General Josh Shapiro Wednesday announced he has called on the U.S. Department of Education to immediately discharge the student loans of eligible borrowers who attended schools that abruptly shut down before they could complete their degrees. Many of those schools were predatory, for-profit colleges.  Read more here.
In the letter, a coalition of 21 attorneys general urges Education Secretary Betsy DeVos to fulfill her obligation under federal law to provide immediate and automatic loan relief to borrowers who attended a school when it closed on or after November 1, 2013, and who did not subsequently re-enroll in an eligible program within three years from the date the school closed.
It is estimated that under federal law, tens of thousands of students nationwide who attended any of the 1,400 schools that closed in 2014 and 2015, more than 50 of which are in Pennsylvania, are eligible for approximately $400 million in automatic debt relief.
“The regulations governing this type of student loan forgiveness unambiguously require Secretary DeVos and the Trump Administration’s Department of Education to process these discharges immediately and without exception,” said Attorney General Shapiro.  “Two weeks ago, a judge ruled that the Borrower Defense Rule – which protects students and their families – must go into effect immediately. I am calling on Secretary DeVos to simply do what the court has ordered.”
Under the Borrower Defense Rule, students may be eligible for automatic closed-school debt relief if they did not complete the program of study at a school either because the school closed while they were enrolled, or because they withdrew not more than 120 days before the school closed.
For example, when the predatory, for-profit Corinthian Colleges shut down in April 2015, it left approximately 16,000 students displaced.
Many of these students are now immediately and automatically eligible to have their federal student loans forgiven and to receive a refund of all repayment amounts, provided they did not enroll in a title IV-eligible program within three years from the date the school closed.
The Borrower Defense Rule also allows students defrauded or cheated by their school to apply for relief and have their federal student loans forgiven. When students submit a borrower-defense claim, they can request to have their loans placed in forbearance and to halt collection attempts, even on defaulted loans.
The Borrower Defense Rule was finalized by the Obama administration in November 2016 after nearly two years of negotiations, following the collapse of Corinthian Colleges, a national for-profit chain of schools.  The Rule was set to go into effect on July 1, 2017.
But in May 2017, Secretary DeVos announced that the Department was rescinding the Borrower Defense Rule and later announced its intent to delay large portions of the Rule without soliciting, receiving, or responding to any comment from any student, stakeholder, or member of the public, and without engaging in a public deliberative process.
The Department simultaneously announced its intent to issue a new regulation to replace the Borrower Defense Rule.
In response, a coalition of state attorneys general including Attorney General Shapiro, filed a lawsuit in July 2017, alleging that the U.S. Department of Education violated federal law by abruptly rescinding its Borrower Defense Rule.
As a result of this lawsuit, a federal judge ordered the Education Department to begin enforcing the Borrower Defense Rule on October 16, 2018.
at 11:02 AM No comments: 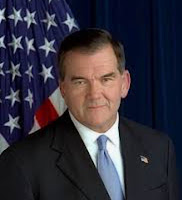 Former Gov. Tom Ridge issued this statement on the Pittsburgh synagogue shootings--
"The violence, bigotry and hate of the last few days has me distraught and upset, with my country and our leaders," Ridge said. "First it was the targeting of politicians and journalists with weapons of destruction, soon followed by the murder of defenseless worshipers observing the Sabbath. Both incidents are assaults not only against humanity, but also our Constitution.
"It is a tragic manifestation of divisive, mean and intolerant civic leadership. My heart aches for the horrible and painful loss these victims and their families have experienced, not to mention the fear and anxiety that the Jewish community around the country must now feel.
"Too many of our civic leaders no longer speak to the better angels of our nation. I am so proud and grateful to be an American citizen yet am concerned about the direction our leaders are taking us. We must demand more than simply condemning these actions with empty rhetoric."
at 10:17 AM No comments: