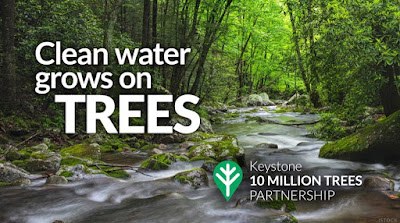 The October 1 PA Environment Digest is now available.  Click Here to read this week's edition.
at 10:50 PM No comments:

Pennsylvania's Inter-Agency Election Preparedness and Security Workgroup and county officials from across the Commonwealth participated in a tabletop exercise Wednesday to train on hypothetical situations when environmental or weather-caused issues could potentially impact voting on election day.
"These trainings, which create realistic election-day scenarios to which officials must react, allow for vulnerability assessments, crisis planning and practice in teamwork," Acting Secretary of State Robert Torres said. "They are invaluable in preparing us at all levels – local, state, and federal – for incidents like, in this case, environmental and weather challenges, such as those we experienced during the May primary election in Pennsylvania."
The half-day training, at the Pennsylvania Emergency Management Agency, simulated natural and manmade events such as inclement weather, power outages, and civil unrest disturbances on election day.
It emphasized best practices in incident planning, preparedness and response, and encouraged building partnerships, creating templates for use in an emergency and utilizing online support and other training.
"In an emergency or unusual weather event, no single state agency is equipped to go it alone," said PEMA Director Richard D. Flinn Jr. "Collaborating with neighboring agencies at the state and local level creates a more robust response system for the safety and wellbeing of communities throughout the Commonwealth."
Election directors, emergency management coordinators, information technology personnel, security staff and law enforcement from about 40 counties participated in person or online, along with officials from the eight workgroup agencies – PEMA, the Department of State, the Office of Administration, the Governor's Office, the state Office of Homeland Security, the Pennsylvania State Police, the Department of Military and Veterans Affairs and the Office of State Inspector General.
After the training, U.S. Department of Homeland Security gave participants an unclassified presentation on election security and answered questions.
This is the second joint election preparedness training the interagency workgroup has undertaken with counties in the last six weeks.
On August 15, staff from approximately 10 Commonwealth agencies and 10 counties participated in the national Tabletop the Vote 2018 training exercise, sponsored by the U.S. Department of Homeland Security.
That event was designed to assist election, information technology and security personnel in training for cyber incident response.
In addition to providing free crisis preparedness and cybersecurity training to counties, the Commonwealth has strengthened already tight election security and intensified local, state and federal partnerships.
The Department of State works closely with all 67 county boards of elections, as well as state and federal experts, to ensure the security and integrity of Pennsylvania's election process.
Some of the many measures in use include:
-- Encryption of voter registration data hosted by the department;
-- A layered set of protections to secure the state voter registration database;
-- Continuous monitoring of the commonwealth's technical environment;
-- Frequent independent vulnerability assessments of commonwealth networks, applications and systems; and
-- Free anti-phishing and security awareness training software provided to counties.
For more information on election security in Pennsylvania, visit votesPa.com.
NewsClips:
State Election Security Commission Recommends Immediate Action On Vulnerable Voting Machines
State Panel Makes Recommendations On Election Security
State Panel Urges Funding For New Voting Machines In PA
at 8:56 PM No comments: